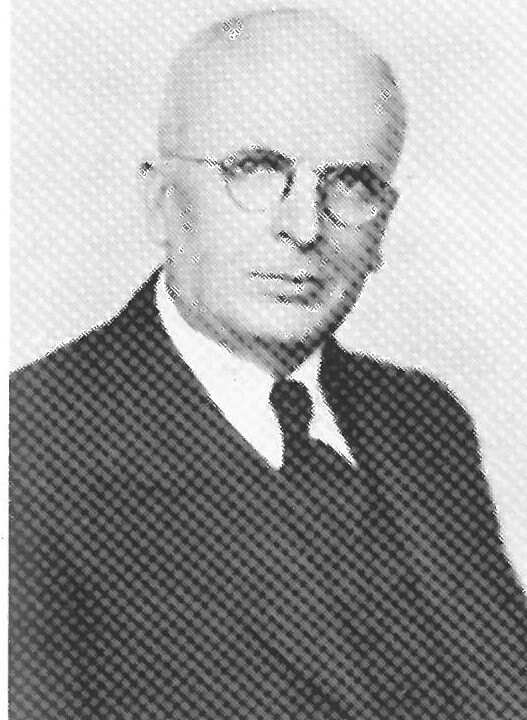 John T. Honeycutt was assisted in the operation of the business by his two sons, Elbert Honeycutt and John H. Honeycutt.  The new facility marked a change in the way funerals were conducted in that loved ones were brought back to the funeral home to be prepared for burial, foregoing the tradition of the undertaker completing the embalming and holding services in the family home.  The Honeycutt family, however, kept the necessary equipment and continued to honor this tradition for longtime Kittitas County Pioneer families up until the late 1930's.

The Honeycutt family was involved in many community activities and projects, belonged to professional clubs and lodges throughout their careers. Upon leaving Ellensburg when the business was sold to George and Betty Evenson, the Honeycutt's moved first to Orchards, Washington and then to Seattle until their deaths in 1958 (John) and 1974 (Margaret). Their son Elbert became a school administrator and son John H. became an anesthesiologist , both in the Seattle area.

Our history can be traced to the summer of 1918, just prior to the start of the Spanish Flu Pandemic, when John T. Honeycutt, who had been working for the Buckley-King Funeral Parlor in Tacoma, moved his family to Ellensburg.  Honeycutt had accepted a position working for Murray T. Bridgeham at Bridgeham's Funeral Parlor which was located on the first floor of the Masonic Temple on Sixth Avenue, which was occupied by the Natural Foods store for many years.

When Mr. Bridgeham met his untimely demise in 1919, having been shot in the chest by an unknown assailant, Honeycutt continued to manage the business for Bridgeham's widow before purchasing the business in early 1920.  In the fall of 1920, Honeycutt also purchased the Steltz Funeral Parlor and consolidated both under the name Honeycutt Mortuary.  The business continued to operate out of the location on Sixth Avenue until 1929 when the facility we still occupy today was constructed on the corner of Third and Ruby in the heart of downtown Ellensburg. 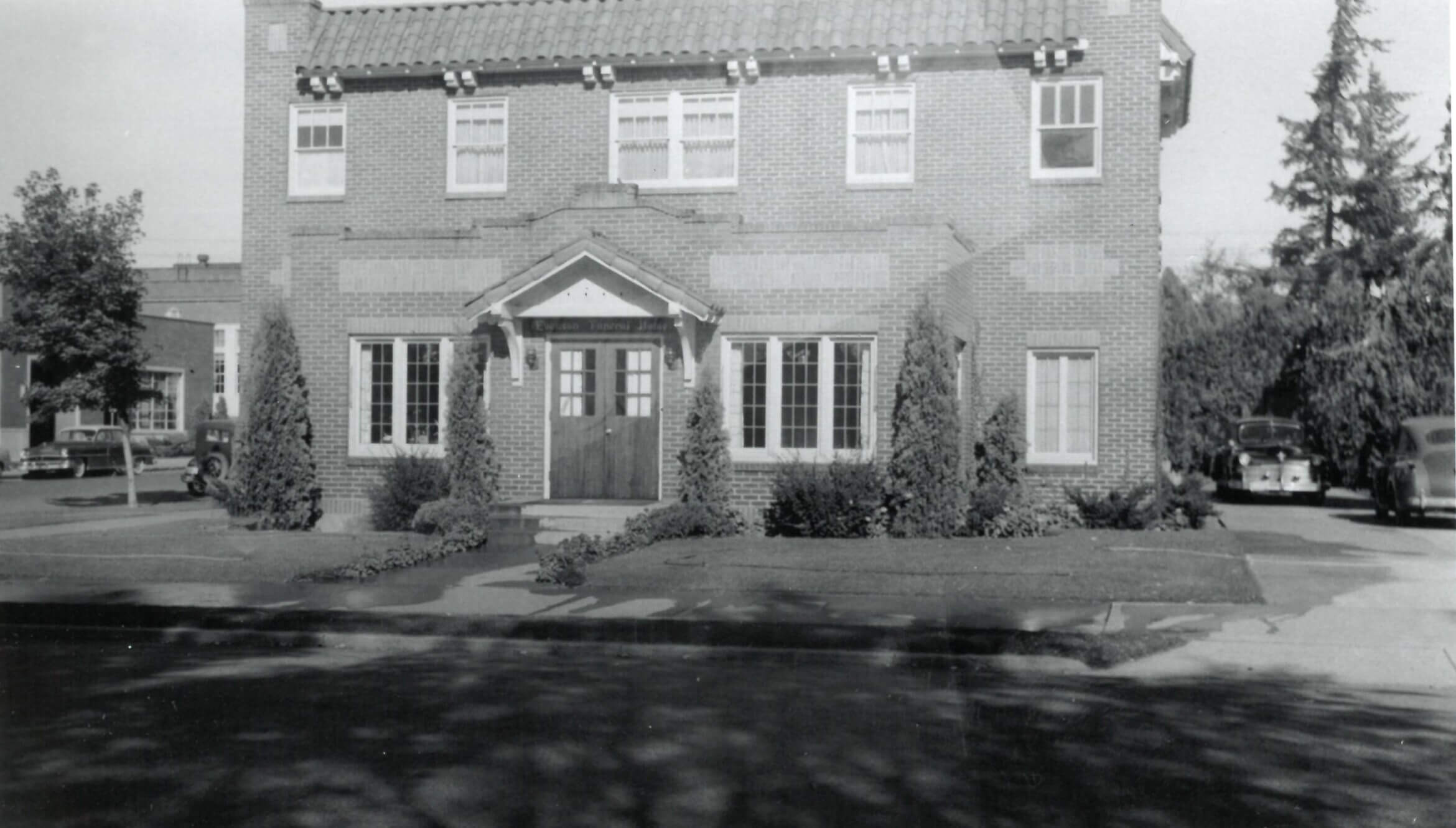 Many longtime Ellensburg residents still remember our funeral home as "Evenson's Funeral Home", which was owned by George & Betty Evenson from 1946 until their retirement in 1984.

George and Betty were both originally from Arlington, South Dakota and were high school sweethearts before their marriage in 1941.  They accomplished many things together, including attending the California College of Mortuary Science in Los Angeles, both becoming licensed funeral directors and embalmers as well as a dynamic team when it came to owning and operating the funeral home.

Under the Evenson's ownership, the facility underwent extensive renovations including expanding the garage, carport and lobby as well as an expansion of the second floor residence where George and Betty raised their two children, Bryan and Kay.

George Evenson was also responsible for mentoring many generations of future funeral directors, including Paul Cotton of Kittitas and Christopher Steward of Cle Elum, both of whom later became owners of the funeral home. 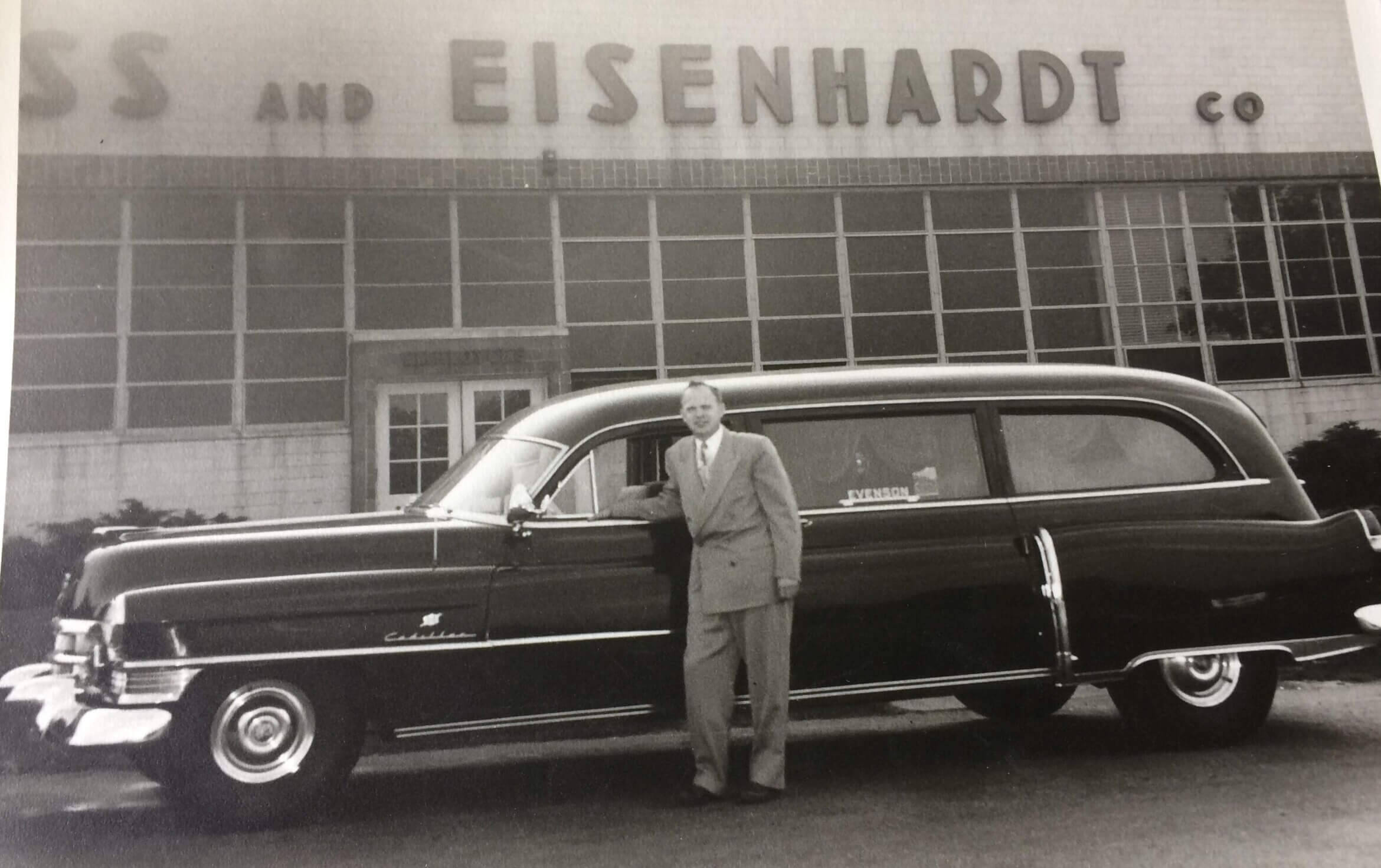 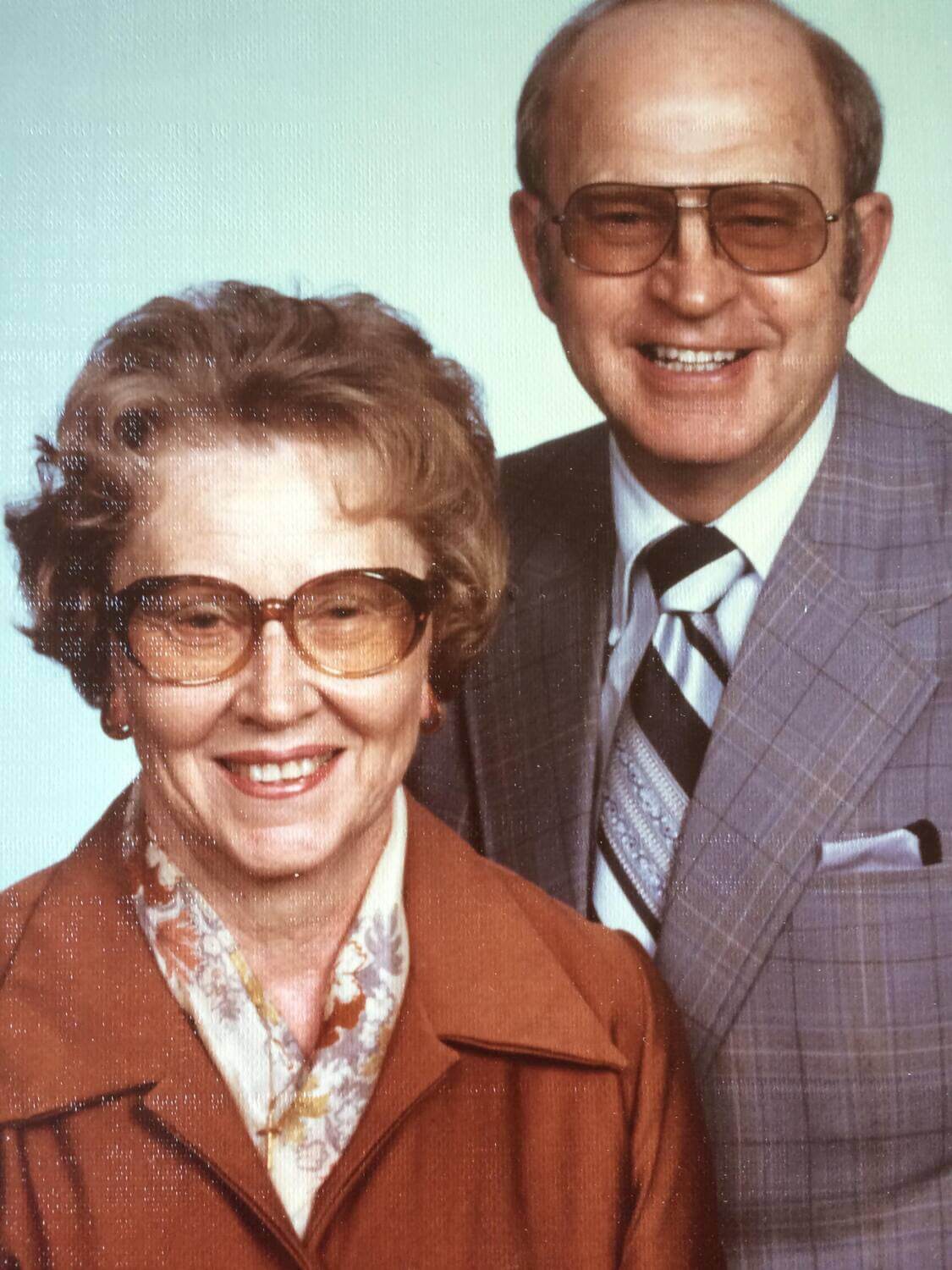 The standard that George Evenson set for the care of families was unparalleled and many people remember his attention to even the finest of details.  We strive every day to live up to the standards that George and Betty set for the way we care for families in our community.

It is also important to note that Betty Evenson was a pioneer for women's equality in funeral service. At the time she became licensed in 1945, Betty was only the fifth female embalmer in Washington state and the first to become licensed after attending an accredited mortuary college. She also served on the board of the Washington State Funeral Director's Association.  We commend and honor Betty's contributions not only to leading a path for women to work in the funeral industry, but for her dedication to the profession as a whole.

George passed away in 2006 and Betty in 2013.  Both are buried in, quite appropriately, "Section E" of the IOOF Cemetery in Ellensburg. 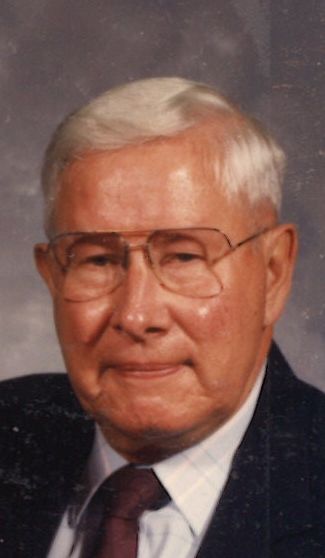 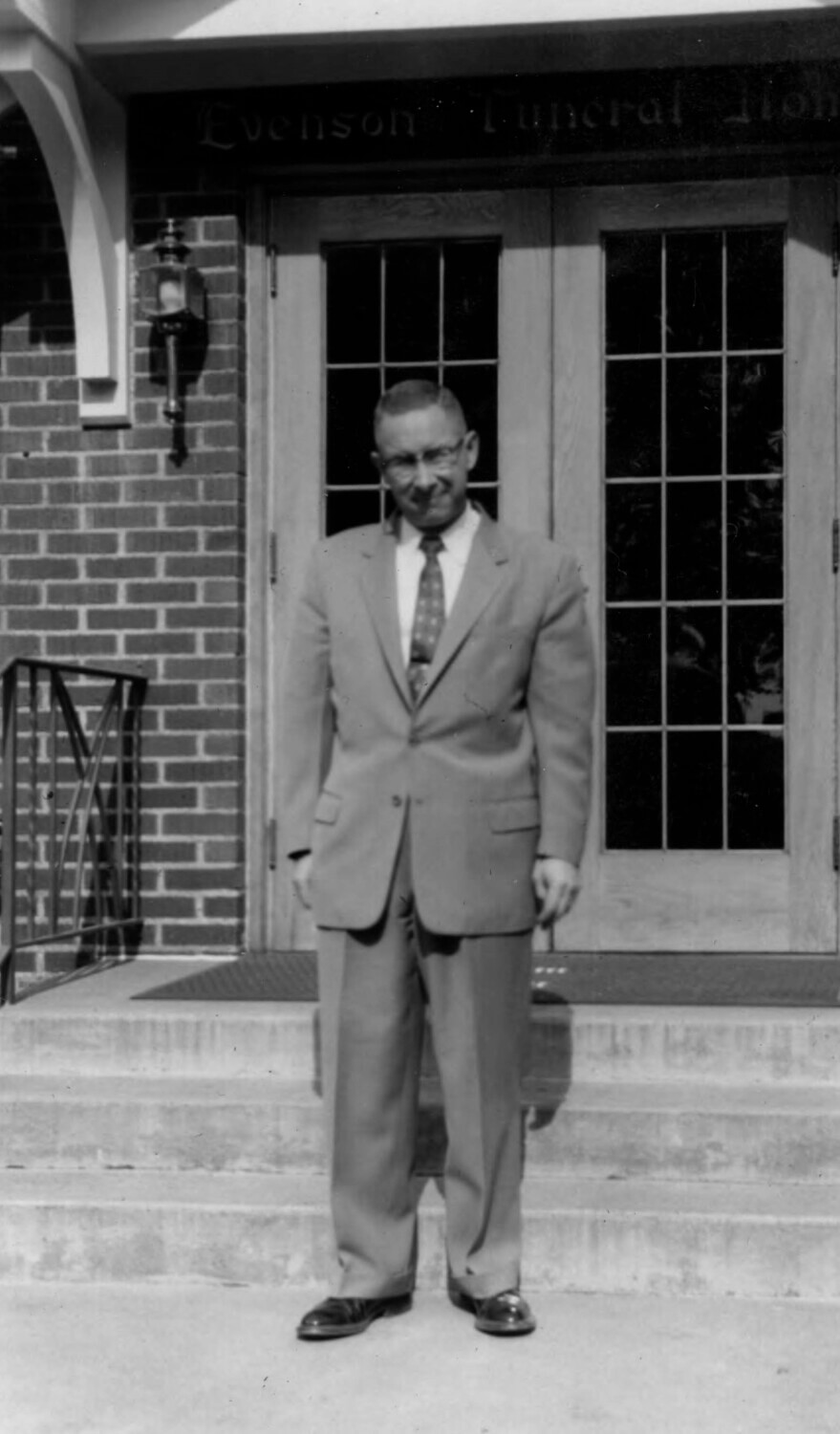 D. Paul Cotton was born in Yakima and when he was a young child his family moved to Kittitas. He was a graduate of Kittitas High School and a Veteran of the United States Navy, serving in both WWII and the Korean War.

Paul served his apprenticeship under the direction of George Evenson and following his graduation from the California College of Mortuary Science (Los Angeles), Paul returned to Ellensburg where he enjoyed a 32-year career working side by side with George Evenson.

In 1984, he bought Evenson Funeral Home from George & Betty Evenson and later bought Brown's Funeral Chapel in Cle Elum from Earl Brown. Combined, both funeral homes operated under the name "Cotton Chapel". Paul retired in 1990, selling both funeral homes to Chris Steward and Ed Williams who operated the firms as Steward & Williams Funeral Directors in Ellensburg and Cascade Funeral Home in Cle Elum.

We would also be remiss if we didn't mention Paul's first wife, Peggy, who worked as a Registered Nurse in the Ellensburg General Hospital and the Taylor Richardson Clinic. Many people don't know that Peggy also attended mortuary college and held licenses as both a funeral director and embalmer. Peg passed away in 1977. Just prior to his retirement, Paul married Frances Lawson and they enjoyed just over 26 years of marriage before Paul passed away in March 2016.

In 1990, Paul Cotton sold both funeral homes to his trusted employees, Chris Steward and Ed Williams.  The team operated the funeral home in Ellensburg as "Steward & Williams Funeral Directors" and in Cle Elum as "Cascade Funeral Home".  Following the sale of the funeral homes to The Hamilton Group in 1998, the firms endured nearly 20 years of corporate ownership before being returned to family ownership in November 2017 when they were acquired by the Gaffney Group of Tacoma, Washington.  Gaffney later sold the funeral homes to Henry D. Johnston in July 2020. 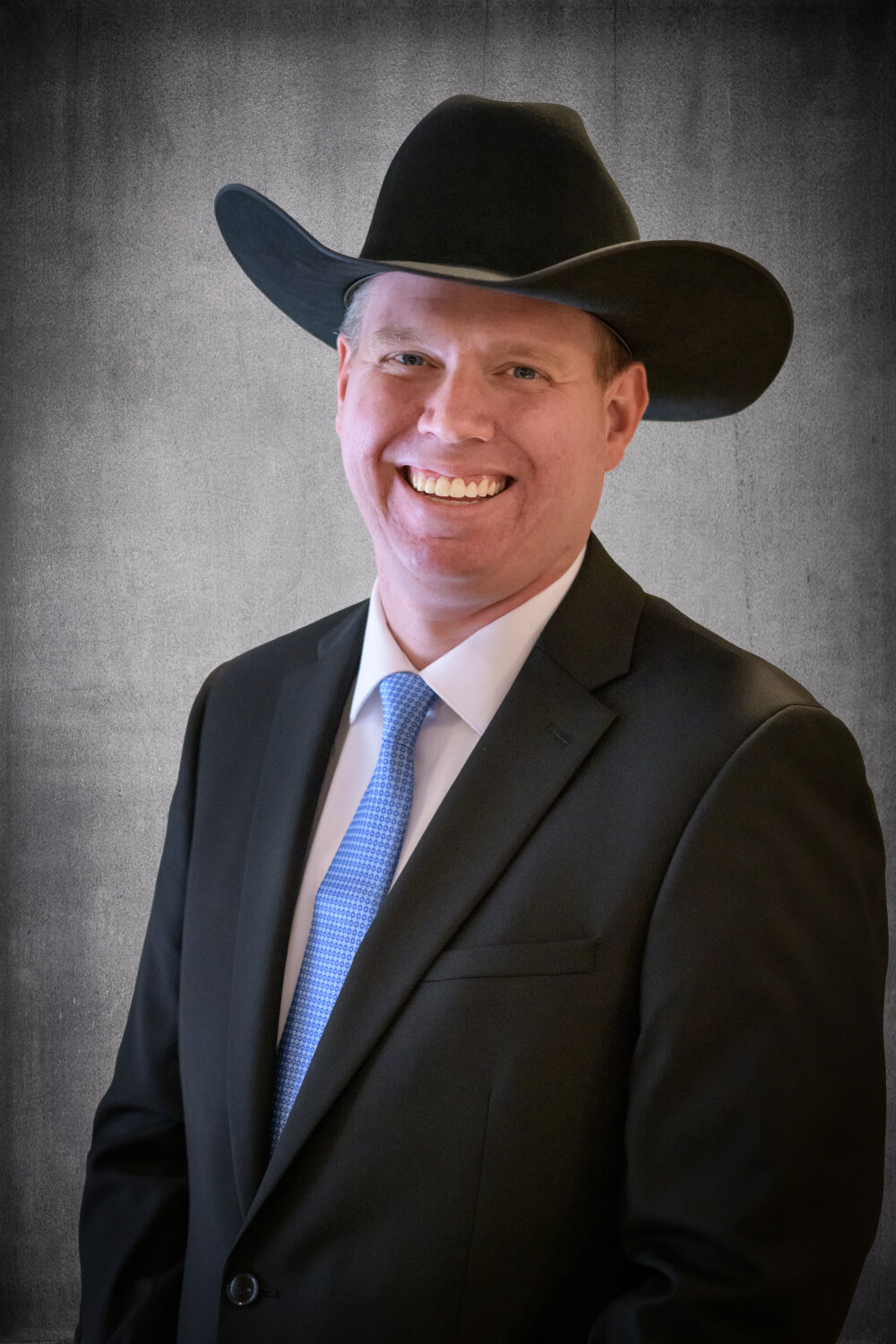 Our Services
Our Philosophy
Our Prices